Anasuya and Indraneela were saved at the auction barn in October 2013.  When she first came she was a bit skittish and afraid. The conditions at the auction barn were terrifying for all the cows there. They were mooing in distress and fear and sometimes the sound was deafening. Electric cattle prods were used in the stalls to move the cows and control them. We think she experienced some abuse in the barn and elsewhere. She is now named Anasuya by the ISCOWP donor who helped save her. After one year she became friendly and unafraid. To make a point,  she will challenge any of the oxen unafraid of their strength.  She and Indraneela are quite happy with pasture to graze. 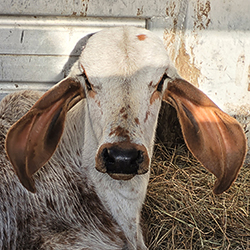 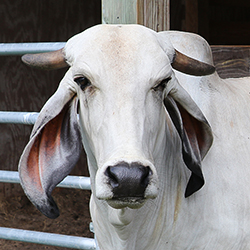 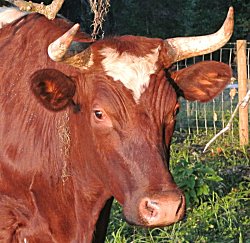