Original article and illustrations by Madhava Priya dasi for ISCOWP 1992©. Text revised and updated by ISCOWP. Reproduce only with credit to the authors.

Hearing the term “Cow Protection,” people typically have one of two reactions. Some think protection is for endangered species and since there are lots of cows, it’s better to concentrate on the giant panda or the blue whale. Others think it may be some pagan worship of animals, the “sacred cow” image.

The actual philosophical reason for cow protection is very simple. First of all, all living entities should be protected from slaughter and other violence at the hands of humans. Not only cows, but all animals have souls the same as we do. All are children of God; all are dear to God.

With this in mind, it is understood that all animal slaughter is a form of murder. The cow, however, is our mother. She gives milk to her bovine babies and if and when there is milk left over she provides milk for humans too.  The Vedic philosophy teaches there are seven mothers:

3) the wife of the Brahmin (if she is not the birth mother),

5) the wife of the spiritual master,

Five thousand years ago, Lord Krishna, the Supreme Personality of Godhead, appeared on earth to protect His devotees and to demonstrate His pastimes. Among those pastimes was His childhood role as a cowherd boy. The cows were very dear to Him because of their affectionate and gentle nature as well as their contributions to human society. Lord Krishna was kind to the cows in return and protected them. We should follow His example. 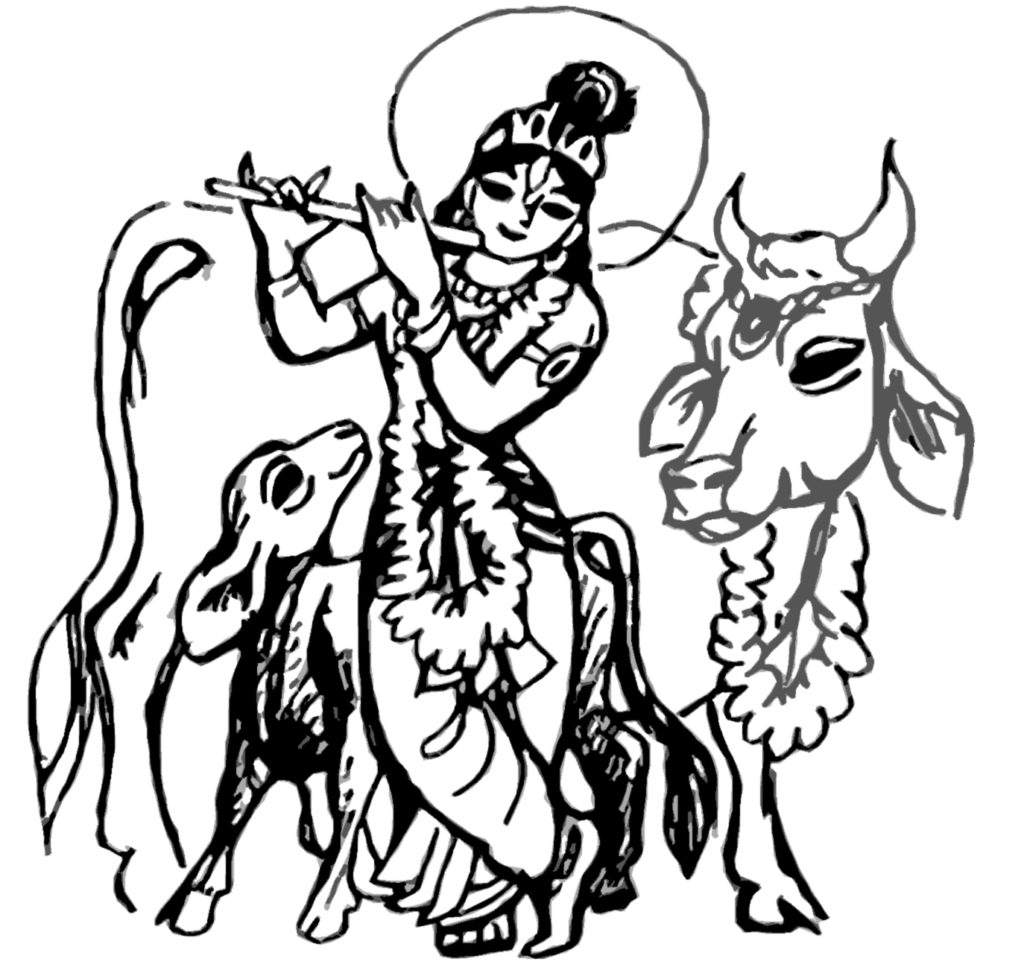 There is a mistake made when only the cow is considered. Typically, the cow’s main usefulness is perceived as milk production. A cow will not give milk unless she first has a calf and half of all calves are bulls who will never produce milk. The expense of feeding the bulls will be a deficit to the farmer unless he realizes their potential for alternative energy by employing them in tilling the fields and hauling. Otherwise, the farmer, in most countries throughout the world, acquires his economic profit by selling the male bovines for meat either directly to the slaughterhouse, the meat industry’s feedlots, or to the veal industry where he lives a short life crammed into a small crate not much bigger than himself.

The cow is also sold for meat when she cannot produce the required quantity of milk. Regardless of milk production, the dung and urine of a cow or bull are valuable. Instead of slaughtering all bovines who do not produce milk, why not utilize their dung and urine in fertilizers, compost, pest repellent, medicines, cleaning products, and biogas fuel to name a few useful and saleable items?

Concerning the use of cow dung as medicine, the International Journal for Pharmaceutical Research published the results of research done in October 2016 at the Microbiology department at Periyar University in India entitled; Antimicrobial Activities of Cow Dung Extracts Against Human Pathogens. The conclusion was that due to the medicinal properties of cow dung, it could be used to create drugs for several diseases caused by antibiotic-resistant pathogenic microorganisms.

The modern system of agriculture does not realize the alternative energy potential of the bull calf nor the variety of useful bovine dung and urine products. Therefore, slaughtering becomes the only economically viable means of management. Most people, accustomed to this viewpoint and seeing no alternative, will throw up their hands and agree, even if they prefer a less violent solution. These people don’t have the facts. They don’t know that the overall value and usefulness of the ox is greater than when he is slaughtered for meat, and even when not producing milk a cow or ox produces useful urine and dung.

The present system is full of ironies and very wasteful. Everyone laments the loss of the small family farm. But economic forces today require quantity control—which is dependent on expensive tractors, polluting fossil fuels, chemical fertilizers, and heavy mortgages—and the small farmer is driven out of business.

Yet, beef and dairy production are subsidized in countries like the USA. There is a disproportionate expenditure of the Earth’s resources to produce beef and milk. A 2010 UN report stated that “agriculture, particularly meat and dairy products, accounts for 70% of global freshwater consumption, 38% of the total land use and 19% of the world’s greenhouse gas emissions.” The same 112 page UN report urges a global move to a meat and dairy-free diet in answer to the food needs of the world’s ever-increasing population simply because that diet uses less of the Earth’s resources.

With the ideal solution of cow protection, the cow and bull will never be slaughtered, and milk is a byproduct not the goal for commercial profit. Unfortunately, there are not many cow protection projects in comparison to the meat and dairy industries. Therefore we recommend refraining from not only consuming meat but also commercial dairy as a way to decrease the number of cows and bulls tortured and slaughtered.

“Cattle are currently the largest source of animal protein (taking meat and milk together) and are set to continue to be significant,” states a report published in 2017, Grazed and Confused, compiled in collaboration by the Food Climate Research Network (FCRN) and Oxford University.

The report also declares, “The livestock supply chain generates some 7.1 Gt CO2-eq emissions, contributing to about 14.5% of global human-made GHG emissions. Cattle dominate global livestock emissions, accounting for about 65% of the total. Ruminants as a whole produce about 80% of total livestock-related GHG emissions.”

The 2017 report concludes that a plant-based diet has advantages for health and the environment.

Cow protection means not only protecting cows from slaughter but providing them a happy life far away from manipulation and abuse. In addition, restricting one’s diet from meat and limiting one’s dairy intake can also protect cows because demand for meat and dairy is what supports the abusive meat and dairy industries. Don’t we all hanker for a simpler, cleaner, and more wholesome, less violent Earth?